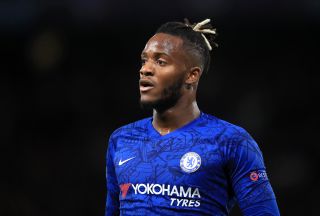 Chelsea striker Michy Batshuayi is on the verge of sealing a season-long loan move to Crystal Palace, the PA news agency understands.

The 26-year-old Belgian is poised to sign a one-year extension on his current Stamford Bridge contract and then take up a second loan stint with the Eagles.

Batshuayi’s current Chelsea contract expires next summer and a further agreement until 2022 will stop him becoming a free agent once his expected loan at Palace comes to an end.

Palace have already signed England Under-21 forward Eberechi Eze from QPR for an initial £16million this summer.

Leeds, West Brom and Newcastle had all tracked Batshuayi with a view to a loan switch, but Palace look set to pull off the deal.

Batshuayi spent the second half of the 2018/19 campaign on loan at Palace, but remained on hand at Stamford Bridge last term in Frank Lampard’s first season at the Blues’ helm.

Batshuayi joined Chelsea from Marseille for £33million in 2016, but has never managed to command a regular first-team berth and has spent time on loan at Borussia Dortmund and Valencia as well as at Palace.