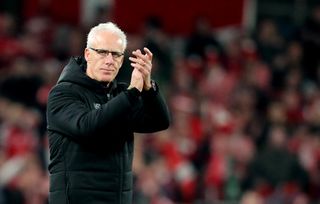 Mick McCarthy has taken his earlier-than-planned departure as Republic of Ireland manager in his stride.

McCarthy returned for a second spell in charge of Ireland in December 2018, with the aim of managing them at Euro 2020 and then allowing Under-21 boss Stephen Kenny to take over.

But the Covid-19 pandemic has seen the play-offs for that tournament postponed to an unconfirmed date and the event itself pushed back to 2021.

As a result, McCarthy has now left his post ahead of the planned date of July 31 with Kenny given the chance to start work now.

He has already made his mark, bringing in former internationals Keith Andrews and Damien Duff to work on his coaching staff alongside Alan Kelly, with new U21 boss Jim Crawford assisted by John O’Shea.

“I took the job in December 18 and I remember all the questions then, ‘what if it goes longer?’ but I said ‘July 31, 2020’ and that’s when I should be leaving, but I have no games now and the sensible thing is to let Stephen take over and plan,” McCarthy told talkSPORT.

“He has time to talk to the players and plan, rather than me stay on a dead man walking which is ridiculous.

“My job ends July 31, I accepted that at the very start. When this situation arose, this Covid-19, I am only doing what my contract says and stepping down.

“Yes I am bitterly disappointed I don’t get the chance to take us to the Euros but I am also so pragmatic about it.”