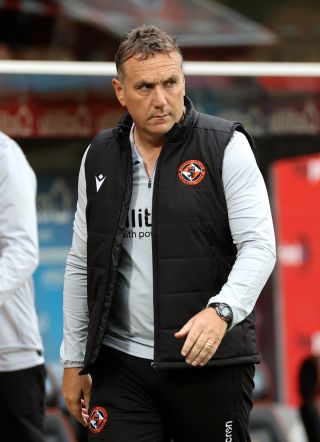 Micky Mellon claimed a number of players failed to show the desire needed to prove themselves at Dundee United after his side suffered a 1-0 home defeat by Peterhead.

Steven Boyd’s well-taken second-half goal gave the League One outfit a deserved win at Tannadice in the Betfred Cup.

Mellon picked a strong team with the likes of Cammy Smith and Paul McMullan starting and Liam Smith back following two months out with a knee injury.

But his side never got going against their part-time opponents.

Mellon told United’s in-house video service: “I’m frustrated because a number of people got an opportunity to show us the fire and desire to become Dundee United Premiership players and, with all due respect to the opposition who deserved to beat us, we didn’t show enough of that.

“I know we are a club that’s just come up a level but I would have been expecting to see more from a lot of the boys.

“Dundee United is a fantastic football club and surely we turned up before the game knowing we had to go out there and play with the aggression and a level of performance befitting of the size of the football club and the level we are playing at?

“But there wasn’t enough that grasped that nettle and that’s what I am disappointed about because I back my players and work hard with them.

“I always say if an opportunity comes along then I will play them, because if you are here and sign a contract with Dundee United then you will play.

“But you will be expected to perform at a level that was better than we got.

“I take my share of responsibility because I am the manager. I always do that, I am not trying to bat anything off.

“It was just a thoroughly disappointing day and we will no doubt get the impact of the criticism that comes our way.”

“The players deserved that win,” he told the club’s official website.

“Everybody played their part and they carried out the jobs they were asked to do really well.

“I told them that if they all did their jobs that they would have earned the right to play and that is what happened.”