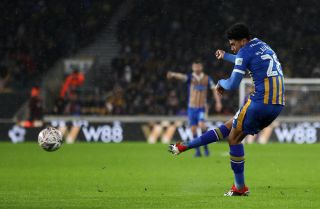 Shrewsbury midfielder Josh Laurent has warned that Liverpool can expect a physical encounter when they travel to Montgomery Waters Meadow in the fourth round of the FA Cup on Sunday.

Shrewsbury’s reward for a 1-0 win over Bristol City in a third-round replay is a meeting with Jurgen Klopp’s world and European champions on home turf.

Having fielded a young side for their third-round victory over rivals Everton, Liverpool are expected to make several changes once more, but regardless of who is on the team sheet, Laurent warned they will not get special treatment from their hosts.

“We’ll try and play a bit of football, but we’ll try to make it a physical game,” he said. “We’re hard to beat. We’re not going out to hurt anyone, but to stamp our authority.

“We want to make sure they know they’re in a game early, tell them we’re not here for a day out. We’re here to win the game.”

Few would back the Shrews against the runaway Premier League leaders, but Laurent insists his confidence going into the game is genuine.

“We’ll all be trying our hardest to beat them, and I’m pretty confident we will,” Laurent said. “I just think at our place, the pitch will be different, and on our day we’re hard to beat, defensively strong.

“As long as we can keep the back door shut, we’ll always win games. Nick a goal, as we did at Bristol, I’m sure we can do that again.

“We took Wolves to a replay last season and did well against them at their place, nearly going in at half-time 2-1 up. Who knows? If we had done that we might have seen the game out.”

Laurent admitted that facing Wolves twice last season had shown him up close the quality of a Premier League side.

“In the first game, 10 minutes in we pressed them really high, we pushed them back almost to their goal line,” he said. “Somehow, I don’t know how, they played their way round it. That’s the level they are on.

“Good players who know what to do with themselves in every situation. That was a great game to learn from. And Liverpool are supposed to be the best team in the world so I’m sure they’ll be on a different level again.”

If Shrewsbury were to have a hero on Sunday, Laurent might be a good bet.

The 24-year-old bagged the winner when the Shrews beat Championship Stoke in the third round last year – having already won a penalty in the match – and was also on the scoresheet at Molineux as they lost the replay 3-2 having led 2-1.

“When it is FA Cup weekend I am looking forward to it, because it usually means goals for me,” Laurent said. “I am hoping another one comes again this Sunday.

“I think I dreamt about it a few times. But no-one cares who becomes the hero at the club. We are just looking to win the game.”