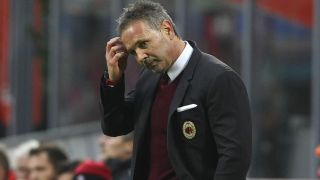 Sinisa Mihajlovic says AC Milan fans were justified in their reaction to the 1-0 home defeat to Bologna on Wednesday.

Emanuele Giaccherini struck in the closing stages to end the visitors' 11-game streak without a win over the Rossoneri and increase the pressure on Mihajlovic's position as head coach.

Milan supporters made their feelings clear as they booed the team off the San Siro pitch at full-time and Mihajlovic accepts they were entitled to their frustration.

"It's a defeat that hurts because we created a lot, but we score few goals," he told Mediaset.

"The boys always try to win. The fans boo and I can understand that, they were right."

Mihajlovic was left to rue a number of missed chances for his side, with Alessio Cerci and Carlos Bacca both guilty of spurning one-on-one opportunities, but he remains defiant despite the growing speculation over his future.

"I never give up. We lost but we played our game. We had five one-on-ones with the goalkeeper," he added.

"We risked nothing for 70 minutes, then our desire to win made us push forward too much and we became unbalanced.

"We can't forget that, for four or five months, we've only had two strikers. We've been without [Jeremy] Menez all year, [Mario] Balotelli has only managed two games.

"We must continue working to stay calm and try to improve a few things. Today we made too many mistakes and eventually you risk losing, as has happened.

"It hurts, but we have to focus on the next game with Roma."

Mihajlovic has also denied any discussions with CEO Adriano Galliani immediately after the defeat, continuing: "We haven't talked. There will be chances to talk tonight or tomorrow."

Milan are now eight points off the top three following Wednesday's results but Mihajlovic will not give up on a return to the Champions League this season.

"The goal is always to win a place in the Champions League and try to go as far as possible in the Coppa Italia, and try to win it," he added.