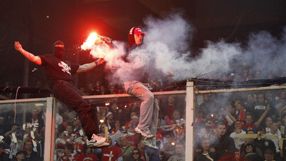 The Serbians top Europe's Group A with four points from two games alongside Belgium and Croatia and Mihajlovic stressed frenetic but well-behaved support was essential for his youthful team in their bid to reach the 2014 tournament in Brazil.

"I will remember forever what a cauldron this stadium was when I played for Red Star against Bayern Munich in the 1991 European Cup semi-final return leg and I want that kind of atmosphere tomorrow," he told a news conference on Thursday.

"Bayern lost because they were overawed and I want Belgium to be overawed like that tomorrow, but those fans intending to jeer the Belgian national anthem or their own national team, as they have done in the past, should stay home.

"I have a team full of young players here and these lads will play their hearts out no matter what, but our fans must know that unreserved support means the world to these boys."

Serbia were given a roasting by their fans in Belgrade, who have acquired a reputation in the rest of the country as being a hard bunch to please, throughout the team's dreadful Euro 2012 qualifying campaign.

Following Serbia's 6-1 demolition of Wales in Novi Sad last month which sent them top of the group on goal difference, Mihajlovic vowed Serbia would not play in Belgrade again if the home supporters were hostile to their own team against Belgium.

He also tried to shift the Belgium match from Belgrade to Novi Sad, where 15,000 Serbian fans created an intimidating atmosphere against the Welsh, but the venue could not be changed at such short notice.

The former international midfielder-turned-defender, who played for AS Roma, Sampdoria, Lazio and Inter Milan after winning the European Cup with Red Star in 1991, was optimistic about Serbia's chances of qualifying for the World Cup finals.

"It's been our objective from the start to rebuild and at the same time reach the tournament in Brazil as well as become a force to be reckoned with because we have so much potential," said the 43-year-old.

"These things sometimes don't go hand in hand because it's a process that requires time, patience and plenty of matches against the best teams, but I have a lot of faith in these blossoming young players who can beat anyone on their day.

"On the other hand, they can also lose to anyone because they lack experience and steel, although they have perfect role models in senior players who are happy to guide them through all the trials and tribulations."

One of those stalwarts, Manchester City left back Aleksandar Kolarov, warned his Serbia team mates they must keep cool heads.

"They have to keep their feet on the ground when they win and their heads up when they don't," he said.

"We are on the right track as these youngsters are quick learners and they have already realised that every practice session counts," added captain Branislav Ivanovic, who is likely to face his in-form Chelsea team-mate Eden Hazard.