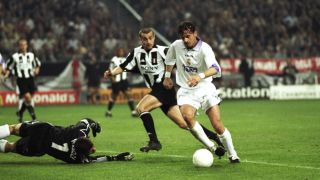 Real Madrid and Juventus will meet in the Champions League final in Cardiff on Saturday – 19 years on from when these two heavyweights last crossed swords on European club football's top stage.

Head coach Zinedine Zidane hopes to lead Madrid to a successful defence of their title and make the recently minted LaLiga champions the first club to achieve this feat in almost three decades.

During his celebrated playing days, Zidane was unable to help Juventus accomplish the same aim in 1997, when the then-reigning European champions lost 3-1 to Borussia Dortmund in Munich.

In Amsterdam 12 months later, Juve were at their third final in as many years having secured Serie A glory domestically.

Madrid were firmly viewed as outsiders, having finished a distant fourth behind Barcelona in LaLiga, but Predrag Mijatovic stunningly ended their 32-year wait for a seventh European crown by sealing a 1-0 win in the 66th minute.

Yugoslavia forward Mijatovic finished second in the 1997 Ballon d'Or poll – behind Brazilian superstar Ronaldo and a place ahead of Zidane – on account of helping Madrid to the Spanish title in 1996-97.

But under Fabio Capello's successor at the Santiago Bernabeu, Jupp Heynckes, Mijatovic struggled to replicate his form the following season and failed to find the net once in Europe on the road to Amsterdam.

To make matters worse, he was struck by a calf problem during the build-up to the final. As documented in Sid Lowe's book, Fear and Loathing in La Liga, Mijatovic went to considerable lengths not to miss his moment – receiving treatment from Madrid's medical staff but swearing them to secrecy in Heynckes' presence.

He completed a final training session in the Netherlands with socks pulled up high to conceal a strapping and refused the strain of practicing penalties, much to his coach's bemusement.

The subterfuge paid off. Having told room-mate Davor Suker he would score the winner in a 1-0 victory, Mijatovic promptly did just that, shifting the ball around Juventus goalkeeper Angelo Peruzzi after Roberto Carlos' shot was blocked and lifting home a measured finish from an acute angle.

The famous tagline Zidane would play under at Madrid was yet to be coined but he entered a match packed with A-grade talent in Amsterdam as the star attraction.

After joining from Bordeaux in 1996, Zidane's masterful midfield play quickly became indispensable to a dominant Juventus outfit, who he helped to Serie A glory in each of his first two seasons.

His Champions League return in 1997-98 was three goals and seven assists in 11 matches but, having lashed an early left-footed shot wide, he was unable to bend the final to his will.

France colleague Christian Karembeu performed an admirable stifling job for Madrid and the two men would soon enjoy the ultimate triumph alongside one another at the 1998 World Cup on home soil, with Zidane heading a brace in the 3-0 final win over Brazil.

He scooped the 1998 Ballon d'Or, meaning the Champions League reverse to his future employers stood as a rare blemish for Zidane at the start of his imperial period.

In 1998, Madrid's Manolo Sanchis carried the burden of near misses and an aching desire to succeed.

A one-club man, defender Sanchis made his name in the feted "Quinta del Buitre" side that was moulded in the Madrid youth system.

The 1985-86 season marked the first of five straight LaLiga titles for Madrid but they were unable to replicate this dominance in Europe, suffering semi-final heartache in 1987, 1988 and 1989.

To make matters worse, Sanchis' father Manuel was a member of the Madrid side that won their sixth European crown in 1966 – a date that hung more heavily over the club the further away it drifted.

Playing alongside Fernando Hierro at the heart of defence and aided by some slapdash finishing from Juve striker Filippo Inzaghi, Sanchis would end this torment by lifting the famous trophy as captain.

Madrid's European famine was quickly followed by a feast as Champions League final wins in 2000 and 2002 followed – Zidane majestically volleying the decisive goal against Bayer Leverkusen in Glasgow on the latter occasion. La Decima would have to wait for 12 years, as Madrid's thirst for the biggest names was not always matched by success on the field.

Juventus are still to add to their two European titles, with a penalty-shootout defeat to AC Milan in 2003 and going down against Barcelona in 2015 meaning they have finished as runners-up on six occasions.

The continent's ultimate nearly men were forced to rebuild in between those two defeats as the Calciopoli scandal saw them demoted to Serie B in 2006.