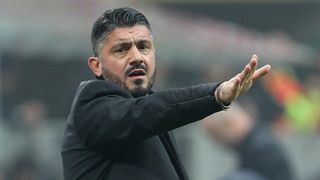 AC Milan head coach Gennaro Gattuso criticised his players for taking too many risks as they held on for a 1-0 Serie A win against Crotone on Saturday.

Milan came into the fixture on the back of a three-match winless league run, but Leonardo Bonucci's 54th-minute goal was enough to claim a much-needed victory.

However, Gattuso expressed frustration that his side could not build on their lead over the relegation candidates, despite their dominance and feared conceding a leveller late on.

"We were coming off a period that wasn't great, so we needed to give a sense of consistency to our results," he told Sky Sport Italia.

"I only celebrate when you win the match, otherwise it's meaningless.

"We played a great game for 70 minutes, but then made far too many mistakes and risked throwing it all away. We ran so many risks at the end."

Bonucci's goal - his first for the club - arrived in bizarre circumstances, as an attempted punched clearance by goalkeeper Alex Cordaz bounced into the net off the defender.

"In the first half we were only missing the goal to complete a great performance concerning technique and personality," added Bonucci.

"In the second 45, we did well to continue believing in ourselves to bring the three points home.

"The first months of the season are in the past. We have made mistakes but from there we have learned and moved forward with the goal of achieving much better results in the second half of the season."

Milan sit 10th in Serie A following the victory.