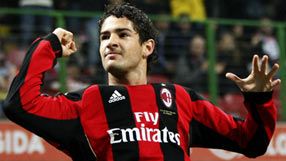 Previous leaders Lazio were beaten 1-0 at Cesena, their second defeat in a row, while injury-hit Inter lost more ground ahead of meeting Milan when they were held to a 1-1 draw at promoted Lecce to slip to fourth.

Napoli moved a point above Inter into third and leapfrogged Juventus, who drew 1-1 at Brescia, thanks to Ezequiel Lavezzi's strike deep into stoppage-time in a 1-0 win at Cagliari.

Alexandre Pato, booed by his own San Siro fans of late following some average displays, handed Milan a first-half lead when he headed in Clarence Seedorf's corner after the Dutchman was again preferred to substitute Ronaldinho.

Slovenian Armin Bacinovic equalised for the Sicilians after the break before a Zlatan Ibrahimovic penalty and substitute Robinho sealed the victory.

Massimilano Allegri's side went a point above Lazio and three above Inter with 11 games gone to leave Rossoneri fans dreaming of a first Serie A title since 2004 despite another patchy performance where they let a lead slip.

"We go to the derby with a good dose of self-confidence," Allegri told Sky, adding Pato and Filippo Inzaghi had knocks.

Their hopes of beating rivals Inter on Sunday will be buoyed by more dropped points for Rafael Benitez's men.

Inter, held to a 1-1 draw by Brescia at the weekend when Wesley Sneijder fainted with anaemia, rested their playmaker despite their plethora of injuries in midfield.

The gamble almost paid off when substitute Diego Milito netted on 76 minutes after great work by Samuel Eto'o but unmarked Ruben Olivera equalised with a header from a corner.

The treble winners, bidding for a sixth straight scudetto, are stuttering under the weight of their injury problems and the lack of August buys with Benitez demanding new recruits in January to boost his side's options and hunger for more glory.

"Now let's do well in the derby and turn things round," Benitez said.

Fifth-placed Juve were also held at Brescia, another promoted club, after Fabio Quagliarella gave them the lead only for Alessandro Diamanti to level almost immediately.

AS Roma continued their resurgence following Sunday's derby win over Lazio with a 3-2 home win over Fiorentina.

Along with Pato, fellow Brazilian Simplicio scored the only other first-half goal in Wednesday's nine Serie A matches to help last term's runners-up climb to sixth.

Omar Milanetto gave new Genoa boss Davide Ballardini a winning start with a goal in a 1-0 victory over Bologna.