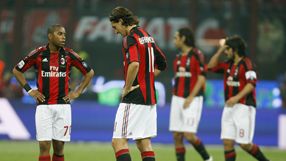 The Group G clash between Europe's two most successful clubs has all the ingredients of a classic encounter, most notably Real coach Jose Mourinho making his first return to the San Siro since leaving Inter Milan after securing the European Cup.

Milan's Ronaldinho, an old adversary of Real from his glittering spell at Barcelona, is also hoping to make a decisive comeback from injury and stop the visitors sealing their place in the last 16 with a first win at the famous stadium.

A long-term injury to former Milan man Kaka halts the fairytale but the second-placed hosts should still have hearts racing.

Instead, Milan, seven-times winners, appear a bag of nerves.

First, Real completely steamrollered the Rossoneri in the first quarter of the Bernabeu group game with the red-hot Cristiano Ronaldo and Mesut Ozil scoring within a minute to wrap up an easy 2-0 win two weeks' ago.

Then they were beaten 2-1 at home on Saturday by old Serie A rivals Juventus, a team which are a long way from their former glory but still managed to find the extra-motivation for a classic match - something injury-hit Milan seem to lack.

"At Madrid we deserved to lose, against Juve we didn't but football is like that. We definitely have to analyse the reason we are losing big games," said coach Massimiliano Allegri, a former Cagliari boss who is a novice at the very top level.

Even the possible return of Ronaldinho after missing two matches with a thigh problem will not be an immediate remedy.

The Brazilian has lost his pace and half his tricks from his Barca days and was largely anonymous in the game at Real.

His replacement Robinho has done no better and is likely to make way even though Alexandre Pato has also looked off-colour.

Zlatan Ibrahimovic, the pillar of Milan's trident attack, at least broke one duck on Saturday when he scored against former club Juve for the first time after two years trying with Inter.

However, the Swede is notorious for not making an impact in European games although he did score against Auxerre and Ajax.

Mourinho will have prepared his troops for the threat as always and is expected to name Sergio Ramos in the only change to the Bernabeu lineup.

Centre-back Ricardo Carvalho is targeting more than just a win for knockout round qualification with two games to spare.

"It's important for us to still be group leaders after our game in Milan. Our goal is to secure the first position as soon as possible and that's why it's important to earn a good result there," the Portuguese told a news conference.

"We were better than them at the Bernabeu and they will want to prove they can defeat us."