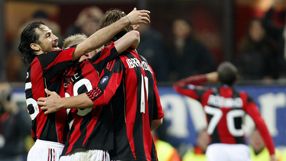 The departure of coach Jose Mourinho after last term's treble triumph and their lack of purchases in the transfer window led to pundits predicting that Inter's dominance in Italy could end this season.

The view that a changing of the guard may be imminent in Serie A has been reinforced by Inter's shaky start to the campaign under Rafael Benitez as well as a plethora of injuries and illnesses which have assaulted his squad.

Milan went top after Wednesday's 3-1 win over Palermo while Inter are fourth after being held 1-1 at Lecce.

"If we are lacking intensity it's the fault of everyone, those who go on the pitch and those who work off it," Benitez told Sky TV. "Let's not make comparisons with last season, every campaign is different."

In any of the past five seasons, Milan would not have been deemed credible title contenders even with their current squad.

They are relying too heavily on former Inter striker Zlatan Ibrahimovic and their other new signing Robinho has failed to make much of a positive impact.

Massimilano Allegri's side are also struggling to kill off games when in the lead but Inter's current woes mean Milan still standout as their biggest rivals this term, especially having knocked surprise packages Lazio off top spot.

"We are not title favourites but we are a side worthy of the scudetto," Milan chief executive Adriano Galliani said.

Inter playmaker Wesley Sneijder is set to return for one of world soccer's most watched derbies after missing the Lecce game having fainted with anaemia at halftime of last weekend's 1-1 draw with Brescia.

Midfield enforcer Gennaro Gattuso, having his best season in years, is also available again for Milan after suspension and will relish the screaming 80,000 capacity crowd at the San Siro.

Juventus, as injury-riddled as Inter, lie fifth and look very outside shots for a title charge this term as Italy's most successful domestic side still recover from their 2006 match-fixing demotion.

AS Roma head to Turin on Saturday in good form while city rivals Lazio host third-placed Napoli on Sunday.