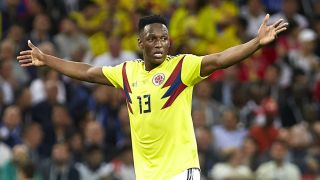 Barcelona defender Yerry Mina does not have a deal in place with Everton, according to his agent.

Everton are reportedly close to agreeing a £21million (€24m) deal for the Colombia international, who made just seven appearances after moving to Camp Nou in January.

However, Mina's representative denied such suggestions, stating no decision will be made over the centre-back's future until Barca have clarified their position.

"It's not true that Yerry has signed for Everton," Jair Mina told Mundo Deportivo.

"A lot of teams are interested in Yerry, but first we want to know what the club's intentions are with him. When we know, we will decide.

"His priority is to play, so if he cannot do that at Barca, he will do it for another team. But first we want to know the club's plans with him."

Mina scored his country's equaliser in the World Cup last-16 clash against England, which Colombia went on to lose on penalties.