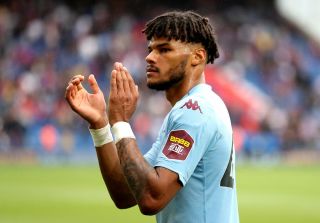 Tyrone Mings revealed he had to set himself new goals when it became clear his future did not lie in non-league football and mortgage advising.

The 26-year-old Aston Villa defender has been called up by manager Gareth Southgate for England’s European Championship qualifiers against Bulgaria and Kosovo after a very different start to his career, which saw him plying his trade with the likes of Chippenham Town.

“I had other goals at the time when I was a mortgage advisor and playing non-league football,” Mings said.

“But I’ve worked with some great coaches and played for some great clubs and everything has come together to get me to this point.”

Mings, who moved to Villa in the summer from Bournemouth, says he looks back on the adversity he faced during his childhood and uses it as a positive.

The defender lived in a homeless shelter with his sisters and mother as a child.

“In moments of difficulty there’s always positives you can take from them,” Mings said.

“It’s given me an ability to empathise with people outside of the game.

“Not that I feel it’s my duty but I really enjoy being able to lend a hand and give back to people, who are in a situation that wasn’t too far away from the one I was in.”