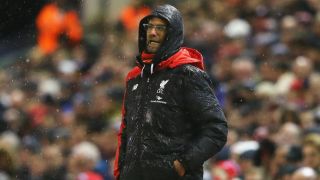 Jurgen Klopp says Liverpool were impressive for up to 70 per cent of their match against Arsenal, but lamented how his team gave away what he described as "easy goals".

That meant Liverpool needed a last-minute equaliser from Joe Allen to claim a 3-3 draw against the Premier League leaders, as Klopp's men dropped to ninth in the table despite the late recovery.

"Sixty to 70 per cent of the game we played really well - we had opportunities, made goals and caused big problems for Arsenal," the manager said to BT Sport.

"I think we deserved to make a draw in a spectacular game. We can be satisfied as a point against Arsenal is OK, but in a few situations I thought we had to win the game and then I thought we could lose it.

"Of course during a game I see the faults.  It was difficult at the end - rain, snow, everything, but we made it good. It was clear you could not play your best pass in the last few minutes so you need what we did, a good ball for Christian, good header, and Joe really deserved to make this goal.

"At this moment there is an explosion, of course, but at the final whistle you cannot ignore that one or two things were not good - you have to speak about this before the next game and we will do that."

Klopp felt Liverpool had shown him glimpses of how strong they can become at stages early on in a thrilling battle with the Gunners.

"We started so good and played such good football," he added to BBC Sport.

"It showed all of us how good we could be. Then we concede a goal from a set play and we have to work at it. Organisation is one thing and sometimes we have a little problem with concentration.

"We gave them two easy goals and after we had to work really hard for our goals. But we scored with a perfect pass, perfect header, perfect finish and nobody doubts it was deserved."