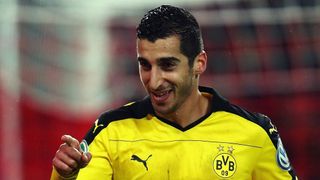 Henrikh Mkhitaryan has promised Manchester United fans to expect an "amazing" team next season as the Jose Mourinho era gathers momentum - and has vowed that he is yet to reach his full potential.

Mkhitaryan completed his move to Old Trafford on Wednesday from Borussia Dortmund, where he had a hand in 49 goals (23 he scored, 26 he provided assists for) over 52 appearances last season alone.

The arrival of such an exciting attacking talent along with fellow new signing Zlatan Ibrahimovic has created a feel-good factor at United not seen since Alex Ferguson was in his pomp.

Add in the Mourinho factor – he won the domestic title in his first full seasons at Porto, Chelsea (during his first spell) and Inter - and Mkhitaryan thinks United are primed to be a force to be reckoned with once more.

"I think this year the team is going to be amazing and it will be a pleasure for me to play next to these guys [Wayne Rooney and Ibrahimovic]," the 27-year-old told MUTV.

"Everyone knows that [the Premier League] is one of the biggest championships in the world and I'm very happy to be part of it.

"I'm very excited. It's a big opportunity for me to play for Manchester. It's a new challenge for me, I think I will try to do all my best.

"For me, this is not the highest point that I can reach. I think I can go further and I'm very happy for that because I think I did everything right in my life and I'm going step by step forward."

Asked how key Mourinho was in his decision to swap the Bundesliga for the Premier League, the attacking midfielder said: "It was one of the facts that I choose Manchester, but also the team because it's one of the biggest clubs in the world, so I couldn't reject the offer and I'm very pleased to be here."

In joining United, Mkhitaryan ended a three-year stint at Dortmund and the Armenia international penned an open letter to everybody associated with his old club on Facebook.

It read: "I wanted to take this opportunity to thank everyone at Borussia Dortmund - from the administration to the coaching staff, my team-mates and of course all the amazing fans - for the love and support you have given me in the past seasons.

"I will never forget the moments we shared together on and off the pitch over the last three years and I feel truly privileged to have represented such a great club and a great city.

"When I think back to my roots and my father's football career [Hamlet Mkhitaryan, the former Armenia international who died aged 33], I was taught to embrace new challenges and I felt that in order to honour my family's legacy, I had to take this step in my career and join Manchester United.

"Thank you once more for all the memories. You will always have a special place in my heart."