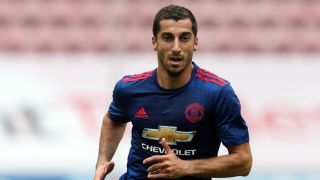 Henrikh Mkhitaryan is desperate to win silverware with Manchester United following his transfer from Borussia Dortmund.

United have endured a number of difficult seasons following the departure of Alex Ferguson in 2013, finishing seventh, fourth and fifth in the Premier League over the past three seasons.

They did win the FA Cup in 2015-16, but opted to replace Louis van Gaal with Jose Mourinho following their failure to qualify for the Champions League.

Mourinho has since brought in Eric Bailly, Zlatan Ibrahimovic and Mkhitaryan to strengthen his squad and the latter is keen to help his new club to success.

"Manchester [United] are one of the biggest clubs," Mkhitaryan said at a news conference.

"It will be difficult but let's hope we can have a good preparation and then we will see."