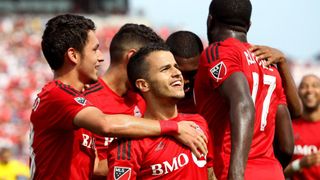 After a dominant inaugural campaign in Major League Soccer, in which he captured the league's Most Valuable Player award and led Toronto FC to its first playoff appearance, Sebastian Giovinco says 2016 will be even better.

Speaking to reporters earlier this week as part of an MLS preseason media junket, the 28-year-old Italian international reflected upon his debut season in North America and said that there is still plenty of room to grow for both himself and his club.

Despite Giovinco's commanding debut in MLS — the diminutive attacker led the league in goals and assists — TFC fell at the first hurdle in its postseason introduction. It's a failure that Giovinco wants to set right in 2016 — but not at the expense of the impressive numbers he put up as a newcomer to the league.

"I have a winning mentality, so I would not trade anything," the former Juventus man said through a translator when asked if he would give up his personal accolades for team glory. "My goal is to win more. So my goal for next season will be to again win the MVP, the assist [and goal titles], and also the league."

Also among his stated goals for the upcoming season is to be selected by Antonio Conte for Italy's Euro 2016 squad, and Giovinco said that he can only do so by continuing the high standard he set with TFC last year.

"It's one of my goals," he said. "Of course, in order to go there I have to play for Toronto FC first and perform in the best way possible."

One thing that Giovinco was able to do faster than many European stars was adjust to the travel, time zone issues and other eccentricities that make MLS a surprisingly tough challenge for players coming from overseas.

It's this relatively short adjustment period that Giovinco credits for his stellar 2015 campaign.

"For myself, the first month and a half was a little bit hard," the TFC star acknowledged. "But other than that everything else was great. I'm happy that I was able to adjust myself so quick, so fast. And after that my only goal was to play and to perform in the best way possible."

One area Giovinco felt it easy to adapt to MLS was tactically, as he said that the North American circuit was not as advanced as its top-level European counterparts in that regard.

But he also poined out that it's not necessarily a bad thing.

"The beauty of this league is that there's less tactics, so from a supporter point of view it's nice to go and see the games because there are a lot of goals," he said, adding that he might be a bit biased in his assessment due to his position on the field.

"From a striker's standpoint it's better because it's more spectacular and there's more chances to score," he said. "For a defender, maybe it's not the best."