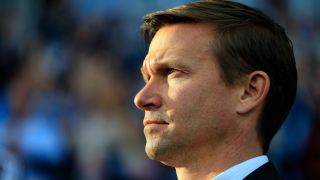 Sacha Kljestan and Mike Grella struck in the first half at the Red Bull Arena in New Jersey as Jesse Marsch's side made it five games unbeaten to start the season.

The Red Bulls moved top of the Eastern Conference, a point clear of DC United, while the Earthquakes are third in the West after three losses in their past four.

The hosts went ahead in the 29th minute through Kljestan.

Kljestan, a 46-time United States international, slid in at the back post for the opener after Bradley Wright-Phillips was unable to get on the end of a cross from the right.

And six minutes later, the Red Bulls doubled their lead.

Again it was a move down the right as Lloyd Sam crossed to the back post, where Grella side-footed in.

The Red Bulls' next outing is against the Los Angeles Galaxy on April 26, while the Earthquakes visit Real Salt Lake on May 1.