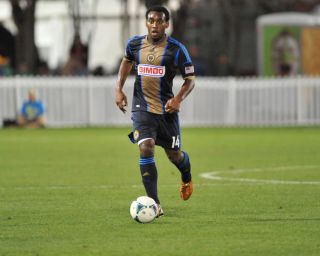 The former Wales international came off the bench to net in the 92nd minute at PPL Park, cancelling out what appeared to be a match-winner just moments earlier from Amobi Okugo.

Earnshaw's late goal was a huge blow to the Union, who sit two points behind the fifth-placed New York Red Bulls in the Eastern Conference in the chase for the final play-off spot.

It marked the Union's 12th draw in 31 league matches this season, while the Fire have been involved in 17 stalemates in 30 and are nine points out of the play-offs.

The Union looked set to take a key three points when Okugo gave them an 88th-minute lead.

A cross from the right went uncleared and the midfielder reacted fastest to open the scoring from the middle of the penalty area.

But, in the second minute of additional time, Earnshaw levelled and the Union only had themselves to blame.

Rais M'Bolhi's clearance was a dreadful one and fell to Earnshaw, who carried the ball forward before chipping the stranded goalkeeper.