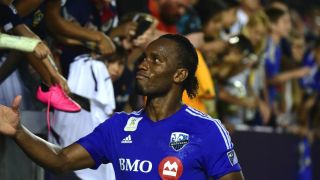 Montreal Impact had Didier Drogba to thank after the in-form striker's two-goal haul inspired a 2-0 win over DC United in MLS on Saturday.

Drogba bagged a brace in the opening 11 minutes at Stade Saputo in Montreal as the Impact strengthened their grip on the sixth and final play-off spot in the Eastern Conference.

The former Chelsea and Ivory Coast striker has now scored seven goals in six appearances for the Impact, who are four points clear of seventh-placed Orlando City with five regular-season matches remaining.

DC - without a win in six league matches - remain fourth in the East, where first and sixth are only separated by six points.

Drogba brought the Montreal crowd to their feet in the fourth minute, with a thunderous free-kick up and over the wall from long range.

The evergreen 37-year-old produced another treat seven minutes later, when he pounced on a misplaced pass, skipped past Steve Birnbaum and scooped the ball over Bill Hamid.

DC had a golden opportunity to reduce the deficit moments later but Chris Rolfe was denied by goalkeeper Evan Bush on the goal line.

The stars aligned in Vancouver as in-form New York City claimed a last-gasp 2-1 win at the Western Conference-leading Whitecaps.

David Villa took his season tally to 17 goals with the match-winning 95th-minute penalty after Frank Lampard was fouled inside the area by Matias Laba.

The Whitecaps, who crashed to a third consecutive defeat, thought they had earned a point when Pedro Morales converted a spot-kick with two minutes of regulation remaining.

Earlier, star New York duo Andrea Pirlo and Lampard combined to open the scoring in the 29th minute, with the latter on hand to tuck the ball beyond David Ousted.

New York have now won three consecutive matches for the first time in their history to be five points adrift of the play-offs in the East, while the Whitecaps are still one point clear atop the West.

Portland Timbers boosted their play-off hopes with a 2-1 win at Columbus Crew.

New England Revolution missed the chance to go top in the East and book a post-season berth after playing out a 1-1 draw against Philadelphia Union.