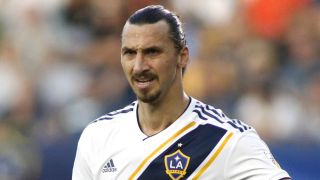 Zlatan Ibrahimovic was on target as LA Galaxy ended their winless streak in MLS, while FC Dallas returned to the Western Conference summit.

The Galaxy had gone seven matches without victory – prompting the resignation of head coach Sigi Schmid prior to last week's 5-3 defeat to Toronto.

LA conceded 11 goals in two games and failed to keep a clean sheet during their skid, however, that changed thanks to Sunday's 3-0 victory over Seattle Sounders.

Ibrahimovic – who scored his 500th career goal against Toronto – broke the deadlock in the ninth minute before Ola Kamara and Emmanuel Boateng got in on the action at StubHub Center.

The Sounders had won nine successive games prior to last week's loss to Philadelphia Union and Seattle crashed to another defeat as Ibrahimovic opened the scoring from the penalty spot after Kamara was fouled by Brad Smith.

Kamara doubled the lead within five minutes of half-time when he tapped in Romain Alessandrini's low cross and Boateng sealed the victory in the 52nd minute.

With the win, the Galaxy closed the gap on sixth-placed Seattle to just three points in the west.

Dallas beat Vancouver Whitecaps 2-1 thanks to Matt Hedges' 87th-minute winner, while Sporting KC lost 2-0 at the Union as the former moved two points clear in the Western Conference.