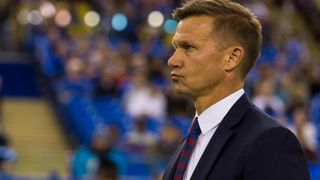 The Red Bulls edged the Montreal Impact 1-0 to go top of the conference, sealing their place in the post-season.

With that result, Toronto – who were held to a 1-1 draw by the Philadelphia Union – and New York City also secured their spots.

The Austrian midfielder headed in a Chris Duvall cross on the hour-mark to secure victory for his team.

For Toronto, Justin Morrow scored a second-half equaliser as they earned a point against the Union.

Orlando City's hopes took a hit after a 4-1 loss to DC United, while Mauro Manotas scored a hat-trick as the Houston Dynamo beat the Portland Timbers 3-1.

The Vancouver Whitecaps and Colorado Rapids played out a thrilling 3-3 draw and Sporting Kansas City beat the San Jose Earthquakes 2-1.