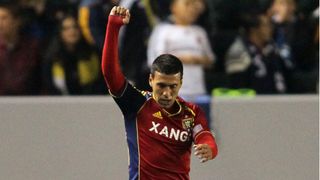 Having lost at the death at home last week, RSL bounced back on Saturday to continue their strong form at Rio Tinto Stadium, with Javier Morales and Sebastian Jaime scoring the goals in the Utah-based club's victory over Seattle.

The win means RSL have only lost twice in their past 25 home games in MLS, while it also ended a three-game losing streak for Jeff Cassar's men.

RSL were literally handed an opportunity to open the scoring in the 12th minute after Sounders defender Roman Torres was judged to have handled the ball in the box.

Morales made no mistake from the spot and just seven minutes later the hosts doubled their advantage, with Jaime responding quickest to nod the ball home after Luke Mulholland hit the bar.

The Sounders had looked to have turned a corner last week with their 4-0 thumping of Orlando City but Saturday's defeat is their sixth in seven league games.

Orlando suffered their second big loss in a fortnight, going down 5-0 at Toronto, with the expansion club also receiving two red cards.

Rafael Ramos was sent off in the first half, while Adrian Winter was also given an early shower with eight minutes remaining as Toronto ran riot at BMO Field.

Jozy Altidore came off the bench to score a brace, Sebastian Giovinco notched a stunning free-kick and Michael Bradley produced a pair of assists for Toronto.

Elsewhere in Canada, Drogba made his first appearance for the Impact in Montreal but could not save his team from defeat as Philadelphia Union triumphed 1-0.

Drogba came on in the 59th minute but the Union struck soon after with Sebastien Le Toux breaking the deadlock with 12 minutes left.

In a frustrating debut for Drogba, the former Chelsea striker was regularly fouled but went close to an equaliser when his late free-kick flashed past the post from 25 yards.

Vancouver Whitecaps leapfrogged LA Galaxy into top spot in the Western Conference with a 1-0 home win over FC Dallas, while Columbus Crew struck twice in the final 11 minutes to trump Sporting Kansas City 3-2.