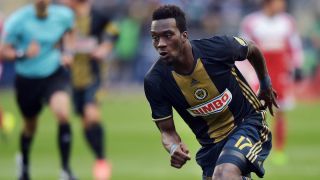 Philadelphia Union recorded an overdue win in MLS thanks to C.J. Sapong's quick-fire hat-trick, while Orlando City were routed by Houston Dynamo.

After a goalless first half, Sapong broke the deadlock in the 74th minute, albeit with some help from a deflection, after being denied by a stunning Luis Robles save moments earlier.

Bradley Wright-Phillips thought he had the equaliser not long after but Andre Blake produced a fine diving save to thwart the Red Bulls star.

Sapong then made it 2-0 with a close-range header in the 81st minute before completing his hat-trick from the penalty spot four minutes later.

Houston showed no mercy in a 4-0 demolition of high-flying visitors Orlando.

Mauro Manotas was at the double in the second half to condemn Orlando to back-to-back defeats.