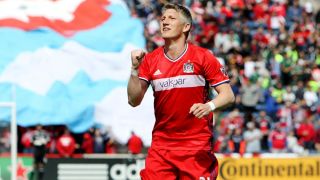 Schweinsteiger side-footed in a Matt Polster cutback in the 59th minute to help the Fire to a 1-0 win over Montreal Impact at Stade Saputo.

Deian Boldor had been sent off for Montreal just after half-time, and Chicago made the most of their numerical advantage.

The win saw the Fire end a four-match losing run, and they sit third in the Eastern Conference.

Orlando have also been in bad form and it continued as they were crushed 4-0 by the New England Revolution.

Jose Aja was sent off in the 80th minute for Orlando, who were trailing 2-0 at the time.

New England are eighth in the Eastern Conference, while Orlando have fallen to 10th.