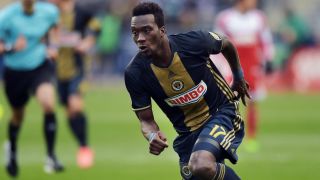 Eastern Conference leaders New York City stayed top of the standings thanks to another road win, while Philadelphia Union rallied to secure an entertaining draw at home to New York Red Bulls in MLS on Sunday.

On the day Villa and Andrea Pirlo were named in the MLS All-Star squad set to face Arsenal next week, the former opened the scoring in the 35th minute – his league-leading 13th goal of the season before Harrison doubled the advantage in first-half stoppage time.

Montreal – with All-Star Didier Drogba back in the side – reduced the deficit thanks to Harry Schipp's strike 10 minutes into the second half but Lampard restored New York's two-goal cushion five minutes from time with his fifth goal in six matches.

New York City are three points ahead of the Union and five clear of the Red Bulls.

A pair of goals in the space of two minutes saw the Union fight back to draw 2-2 against Eastern Conference rivals the Red Bulls.

A first-half brace from Sacha Kljestan – another All-Star selection – had the Red Bulls in a battling pitting second against third in Philadelphia.

But the Union rallied in the second half, with C.J. Sapong converting a 67th-minute penalty before Chris Pontius restored parity a minute later.

Union star Ilsinho saw red four minutes later for a stray elbow but the Red Bulls were unable to make the most of their numerical advantage ahead of next week's derby against New York City.

Two goals in one minute as Pontius levels it up for . Fifteen minutes remain in . Watch on July 18, 2016