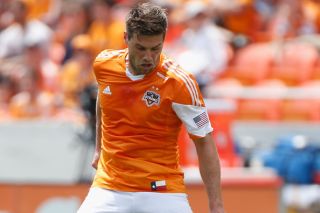 Goals after the hour-mark from David Horst and Ricardo Clark saw the Dynamo to an important win after a long delay at Sporting Park.

Rain saw the clash delayed for 75 minutes after the teams had played the opening 17.

For Peter Vermes' Sporting, who are second in the Eastern Conference, it marked their third loss in four league matches.

The win lifted Houston to 28 points, five adrift of the fifth-placed New York Red Bulls in the East.

After the match resumed, Will Bruin put the visitors ahead with a 35th-minute goal, volleying in from inside the area.

Dom Dwyer drew Sporting level in the 55th minute as his deflected finish found the back of the net after neat lead-up work from Benny Feilhaber.

Another set piece led to another goal, the sealer, in the 67th minute as Brad Davis' cross was flicked into the corner by Clark with a header.