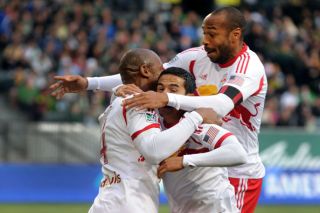 The Australian opened the scoring inside seven seconds at the BBVA Compass Stadium as New York secured a 3-0 win over the Houston Dynamo.

Ibrahim Sekagya and Bradley Wright-Phillips struck in the second half as the Red Bulls moved back above Sporting Kansas City in the east.

With just one game remaining, New York are close to winning the Supporters' Shield – awarded to the team with the best regular-season record.

Cahill got the Red Bulls off to the best possible start.

Picked out from kick-off by Dax McCarty, the Australia international won an aerial challenge before reacting quickly to smash a powerful volley past Tally Hall from 20 yards.

It bettered the previous fastest goal, scored by Dwayne De Rosario 11 seconds into a game in 2003.

New York needed until the 65th minute to double their advantage as Sekagya headed in from close range.

Wright-Phillips completed the scoring with a quarter of an hour to play when he got on the end of a fortunate deflection and easily beat Hall.

In the day's other game, the Los Angeles Galaxy missed a chance to go top of the Western Conference after a 0-0 draw at home to the San Jose Earthquakes.

Bruce Arena's side were unable to find a winner at the Stubhub Center and stay third in the west.