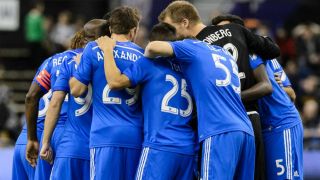 The Impact became the first Canadian franchise and just the second MLS team to advance to the Champions League decider after overcoming Alajuelense 4-4 on aggregate via the away goals rule on Tuesday.

But the Impact's return to the United States did not go according to plan, with Giles Barnes, Ricardo Clark and Rob Lovejoy inspiring Houston to their first win since the opening round of the season at BBVA Compass Stadium.

Montreal enjoyed a decent first half on the road but went into the break trailing 1-0 following Barnes' glancing header from a Brad Davis free-kick in the 15th minute.

Dynamo made sure of the points after half-time, with Clarke firing the ball past goalkeeper Evan Bush in the 72nd minute before substitute Lovejoy completed the scoring eight minutes later.

Saturday's comprehensive win helped Dynamo into fifth position in the Western Conference, one point adrift of Sporting Kansas City and Real Salt Lake, who played out a goalless draw.

The Impact - winless in the MLS this season - are rooted to the foot of the Eastern Conference, with just two points from their four matches so far.

New York Red Bulls salvaged a 2-2 draw at DC United in their top-of-the-table clash in the East.

A brace from Perry Kitchen had United - top of the standings - on track for victory at Robert F. Kennedy Stadium.

But the Red Bulls had other ideas as Damien Perrinelle pulled a goal back for the visitors via a 68th minute header and Lloyd Sam completed the fightback in the dying moments after converting a rebound from close range.

United are two points clear of the Red Bulls, who have a game in hand.

David Villa's return was not enough to prevent New York City from crashing to a late 2-1 defeat at Philadelphia Union.

Villa - returning from an abductor strain - restored parity 10 minutes into the second half after Zach Pfeffer opened the scoring in the 27th minute.

But Vincent Nogueira netted a stoppage-time winner to send the sellout crowd at PPL Park into raptures.