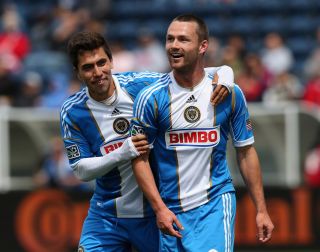 The Revolution claimed a 1-0 victory over the out-of-form Montreal Impact, while the Chicago Fire held on for a 3-2 win at Dallas.

DC United and the Philadelphia Union played out a 1-1 draw, with the latter hanging onto their spot in the top five.

Montreal are fourth and level on points with the Union, while the Fire are sixth – also on 46 points – with New England a point back.

New England needed a 31st-minute goal from Jose Goncalves to secure their vital 1-0 victory at Stade Saputo in Montreal.

The Portuguese defender finished a scrappy goal with a side-footed finish into the roof of the net from inside the area.

Chicago held on for a 3-2 win at Toyota Stadium in Texas after surviving a late scare following a Kenny Cooper brace.

Juan Anangono opened the scoring on 25 minutes with a neat header into the bottom corner.

Mike Magee was fortunate to score his 19th goal of the season – putting him level atop the goalscoring charts – three minutes before half-time.

Brazilian Alex fired a shot towards goal, only to see it hit Magee's back and wrong foot Dallas goalkeeper Chris Seitz.

When Jalil Anibaba scored with a wonderful 25-yard curling effort, the Fire looked to have sealed the three points.

Cooper made for a nervous finish with his brace, but Chicago were able to hold on.