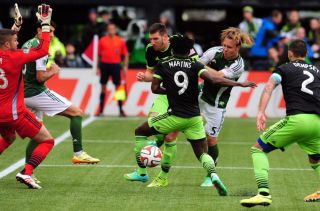 Sounders captain Clint Dempsey and striker Obafemi Martins combined for three goals at Providence Park as the Western Conference leaders sent an ominous warning to the rest of the competition.

The win - Seattle's first in two games - helped the Sounders move to 45 points from 24 rounds, three clear of Dallas, who have played an extra match.

The sixth-placed Timbers suffered a blow to their play-off hopes, with the Portland franchise two points adrift of the fifth and final spot.

Portland's defence struggled to cope during the opening stages, and they were eventually breached in the 18th minute after Dempsey hit the post moments earlier.

Brad Evans, after orchestrating the move on the half-way line, glided past former West Brom defender Liam Ridgewell before firing the ball across the six-yard box for Martins to tap in and silence the vocal home crowd.

After Diego Valeri's attempt on goal deflected over the crossbar for a corner on the half-hour mark, Seattle went up the other end and doubled their advantage following a swift counter-attacking move in the 34th minute.

Martins picked up the ball in his own half, pressed forward and waited for Dempsey's run before playing in the United States international, who tucked the ball past Timbers goalkeeper Donovan Ricketts for his ninth goal of the season.

Chad Barrett got in on the action with a goal of his own in the 70th minute after Ricketts failed to keep the ball out of the net, despite getting a hand on it.

Portland were given a glimmer of hope, when substitute Fanendo Adi got a boot to Rodney Wallace's cross with 27 minutes remaining.

Martins, however, quickly dashed Portland's hopes of a remarkable comeback as he netted his second of the game three minutes later.

Adi was on target again in the 90th minute, which proved to be nothing more than a consolation goal.

Meanwhile, Philadelphia Union accounted for the San Jose Earthquakes by the same scoreline, despite surrendering a two-goal lead on Sunday.

Andrew Wenger and Sebastien Le Toux had given the Union a 2-0 buffer inside the first 14 minutes at PPL Park, only for the Earthquakes to hit back after the interval through Simon Cronin and Chris Wondolowski.

But Philadelphia - seventh in the Eastern Conference - were not to be denied their second win in three games, thanks to Sheanon Williams and Wenger who both found the back of the net in the final 18 minutes.