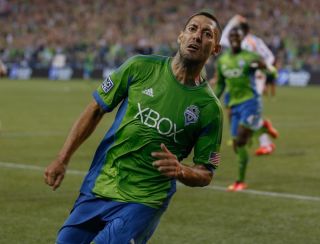 Seattle captain Clint Dempsey continued his red-hot form as the Sounders beat the free-falling Rapids 1-0 at CenturyLink Field on Saturday.

Dempsey's 52nd-minute volley from a Marco Pappa corner sent the home fans in raptures and took his season tally to 11 goals since touching base in Seattle from Premier League side Fulham.

"Just trying make sure I had good connection on it and try to keep it low and it was able to go in."

Back-to-back wins means Seattle have collected 48 points after 25 rounds to be five clear in the West, with the in-form Los Angeles Galaxy not in action until Sunday.

In a blow to their play-off hopes, the result condemned seventh-placed Colorado to a sixth consecutive defeat.

AT BMO Field, United States international Jermaine Jones made his New England debut as the Revolution accounted for Toronto 3-0 on the road.

Former Schalke midfielder Jones joined New England following a 'blind draw' conducted by MLS and came off the bench in the 65th minute.

"Today was a perfect game," said Jones after his New England bow.

"The first 20 minutes was amazing and I would say there was only one team who were going to win this match and we showed it. It was easy to come in being up 3-0."

The Portland Timbers climbed into the fifth and final play-off position in the West after easing past the Vancouver Whitecaps 3-0.

Vancouver occupied fifth by two points before kick-off but second-half goals from Alvas Powell, Maximiliano Urruti and Rodney Wallace changed all that as the Timbers returned to Portland with maximum points.

The Timbers are one point clear of the Whitecaps, though Vancouver have a game in hand.

Ignacio Patti's brace inspired the Impact to their second win in three games, ending the Crew's two-game winning streak in the process.

Dallas missed the chance to temporarily overhaul the LA Galaxy in the West after they were beaten 1-0 by the Chicago Fire.

Former Premier League striker Robbie Earnshaw was the hero, with his goal seven minutes from time proving the difference at Toyota Park.

Dallas' defeat opened the door for West rivals Real Salt Lake, who moved a point ahead in third with a 1-1 draw at the San Jose Earthquakes.