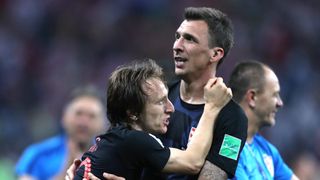 Luka Modric has been backed as a potential Golden Ball winner by Croatia team-mate Mario Mandzukic.

Croatia captain Modric has been tipped to win the award for the best player at the World Cup, having featured prominently in his country's run to the semi-finals.

England await in Wednesday's last-four clash in Moscow, with the Real Madrid midfielder coming up against a number of his former Premier League rivals from his time at Tottenham.

Mandzukic says Modric deserves to be in contention for the Golden Ball, which was won by Lionel Messi in 2014.

"I've known Luka for a number of years, not only from the national team," Mandzukic told reporters.

"He deserves all the accolades he gets, from the media and public.

"He's worked very hard to get to this point, he's our captain and leader and if the team manages a great result and he gets the Golden Ball, he would deserve it."