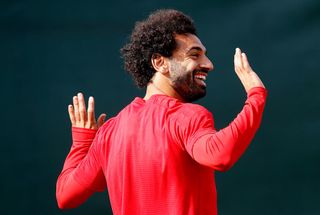 Mohamed Salah has travelled with Liverpool’s squad for the Champions League tie in Genk but defenders Trent Alexander-Arnold and Joel Matip miss out.

Salah sat out Sunday’s draw at Manchester United as he had not sufficiently recovered from the ankle sprain sustained against Leicester immediately prior to the international break but trained with the squad at Melwood prior to their departure on Tuesday afternoon.

Conversely, Alexander-Arnold and Matip both played at Old Trafford but will not feature in Belgium because of a virus and minor knee problem respectively.

Manager Jurgen Klopp was expected to make changes against Group E’s weakest side and it seems Dejan Lovren and Joe Gomez are set to start at centre-half and right-back respectively.

The midfield is also likely to be freshened up with James Milner likely to come back in, while Alex Oxlade-Chamberlain, Naby Keita or Adam Lallana could get the nod with Klopp’s established trio looking in need of a rest, especially with Tottenham due at Anfield this weekend.

Teenage striker Rhian Brewster has also returned to the squad after scoring twice for the under-23s on Sunday.