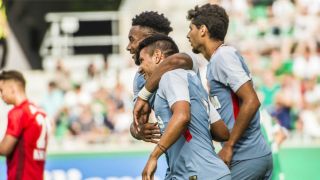 Monaco began their pre-season with a 2-2 draw against Rapid Wien in Austria.

The Ligue 1 champions, for whom Kylian Mbappe has returned to begin training, named a mixture of first-team players and young prospects in a starting XI that included debutant Youri Tielemans, who was signed from Anderlecht for a reported €25million fee.

Rony Lopes, who spent last season on loan at Lille, opened the scoring in the first half before Allain Saint-Maximin crossed for Guido Carrillo to make it 2-0 early in the second half.

Stefan Schwab halved the deficit two minutes later, though, and youngster Manuel Thurnwald made it 2-2 with 21 minutes to play.

Bayern Munich put on a show for the crowd in Herzogenaurach as they battered Erlangen-Bruck 9-1, with Kingsley Coman scoring twice.

Franck Evina also netted a double, with Marco Friedl, Michael Strein, Raphael Obermair and Marco Hingerl on the scoresheet as well, while Jan Sperber scored an own goal. Mario Foth bagged a late consolation for the fifth-tier side.

Fellow Bundesliga side Cologne went one better in their game against Grazer AK, with Artjoms Rudnevs, Jhon Cordoba and Christian Clemens each scoring twice in a 10-1 hammering.

Inter began life under new boss Luciano Spalletti with a 2-1 win over Wattens, meanwhile, with Andrea Pinamonti and Matteo Rover scoring the goals either side of a strike from Simon Zangerl.

Sunderland and Hibs fans paid tribute to Bradley Lowery in the sixth minute of their 2-2 draw at Easter Road, with the young fan having passed away this week following a long battle with neuroblastoma.

Jeremain Lens and Wahbi Khazri scored the goals for the Championship side but Simon Murray and Martin Boyle secured a draw.

6' One Bradley Lowery echoes around Easter Road as the clock ticks over six minutes. A rousing applause from the home fans follows. July 9, 2017

Stuttgart were held to a 1-1 draw by Stuttgarter Kickers, while Marseille defeated Etoile du Sahel 2-0 in France.