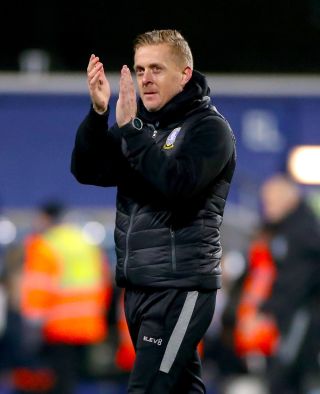 Garry Monk buried the hatchet with Pep Clotet on his first return to St Andrew’s since he was sacked as Birmingham manager as they shared the points in an entertaining 3-3 draw.

Wednesday manager Monk warmly embraced his successor Clotet less than three months after refusing to shake his former long-term assistant’s hand before the 1-1 draw at Hillsborough, then they were deep in conversation after the final whistle.

The Owls twice trailed, to a Jacob Murphy own goal and Lukas Jutkiewicz’s 13th of the season as Barry Bannan and Fernando Forestieri’s penalty levelled before Murphy put them ahead in the 65th minute.

But Scott Hogan’s fourth goal in five games earned Blues a deserved point in the first minute of time added on to extend Wednesday’s run to one win in 11 in the Championship and stretch Blues’ sequence to 10 without loss in all competitions and eight in the league.

The Owls have taken just six points out of 33, a run which has sent them drop from third to 12th since Christmas.

They also have a potential points deduction hanging over their heads after being charged by the EFL for allegedly breaking financial rules.

The visitors got off to the worst start. Wednesday winger Murphy scored an own goal in the sixth minute when he volleyed Jeremie Bela’s corner into his own net under pressure from Hogan.

But after Murphy had a handball appeal waved away, Wednesday equalised against the run of play in the 20th minute.

Bannan unleashed a low left-footed drive from 22 yards that skidded into the bottom corner of the net following a pass from Kieran Lee.

Blues regained the lead on the half hour through Jutkiewicz.

The powerful striker shook off Tom Lees and buried a low left-footed drive to goalkeeper Cameron Dawson’s left after a neat one-two with Hogan.

But the lead was to last just four minutes before Wednesday levelled again, with a penalty.

Forestieri calmly rolled the ball to Lee Camp’s left, sending the goalkeeper the wrong way after Maxime Colin was judged to have brought down Lee.

Blues wasted two chances before the break to have led at half-time.

Ivan Sunjic side-footed inches wide trying to pick his spot from just inside the box, then Kristian Pedersen headed fractionally the wrong side of the post after Roberts flicked on Sunjic’s free kick.

Wednesday punished them by taking the lead for the first time with their first attack of the second half.

Murphy thundered home a first-time, angled shot after Julian Borner’s up and under was seized on by Forestieri, who controlled the ball then laid it into his path.

Only the heroics of Camp prevented Blues falling further behind.

The Blues ’keeper denied Murphy in a one-on-one then produced a superb reflex tip-over to foil substitute Connor Wickham’s volley.

Hogan volleyed home the late equaliser after running on to Jutkiewicz’s flick on from Roberts’s long ball.