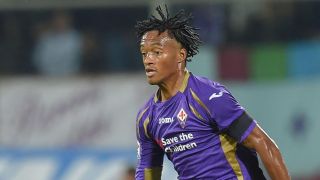 Speculation has gathered pace throughout the transfer window that Colombia international Cuadrado would move to the Premier League leaders.

Montella was disappointed that Cuadrado - who will become a Chelsea player officially after the completion of a medical - is leaving, but stated the fee received was too good to turn down.

"Honestly, it was something that had to be done," Montella said.

"As a coach I'm disappointed, but on a pragmatic level the fee is so high that it's worth it.

"It's nobody's fault, we must absolutely not be distracted, and offer excuses, we must be supremely focused.

"He [Cuadrado] always demonstrated the utmost professionalism, and joy in playing. I'm happy for him, because he's gone to play in a very good team.

"At the moment I'm a bit sad, there are more resources in other leagues, that's a fact. Our appeal is diminished.

"We're getting a player in Salah who will have to adapt to our football, this is a league that's different from the Swiss and the English."

Cuadrado move to Stadio Artemi Franchi in July 2012 and has been a mainstay of Fiorentina's first team in the past two-and-a-half seasons.

The 26-year-old caught the eye of suitors with his performances at last year's World Cup, where he helped Colombia to the quarter-finals before they were eliminated by hosts Brazil.

La Liga giants Barcelona were linked with his services, but a switch to Camp Nou failed to materialise and he now joins a Chelsea side gunning for the Premier League, UEFA Champions League and League Cup titles.