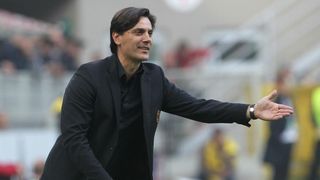 Vincenzo Montella considers wantaway midfielder Steven N'Zonzi to be "very important" to his plans at Sevilla and will make discussions with the France international one of his initial main goals at the club.

The former AC Milan coach was presented as Sevilla's new boss on Saturday after taking over from Eduardo Berizzo, who had been dismissed on December 22, and convincing N'Zonzi to stay could go some way towards a positive settling in period for Montella.

N'Zonzi, who starred for Sevilla last season, has been out of the picture since getting substituted at half-time in the 3-3 Champions League draw against Liverpool on November 21, with Berizzo reportedly singling him out for criticism with the Andalusians 3-0 down.

The Frenchman has been linked with moves to Everton and West Ham, the latter allowing him to be closer to his son in London, but Montella harbours hope that he can convince the former Stoke City man to remain in LaLiga.

"N'Zonzi is a great player for me, so one of my goals is to talk to him and see what his ambition is," Montella told reporters. "For me he is a very important player of Sevilla."

The presentation of new manager Vincenzo Montella has begun December 30, 2017

Club president Jose Castro insisted that N'Zonzi's exile had been purely a technical decision and he will now be available again, while he also claimed there have been no offers for him.

"The club is clear that it wants to have good players to achieve the sporting objectives. The player had friction with the previous coach, but Montella will speak with N'Zonzi and we'll see about his willingness to count on him [N'Zonzi]."

Montella has enlisted the support of Enzo Maresca as part of his coaching staff and he expects the former Sevilla favourite to make his own transition that bit easier.

This morning the new boss got to know the Sports Village December 30, 2017

"He [Maresca] is a historic person at this club," Montella said. "He is a person who has the respect of everyone in Italy and he has my respect too.

"He is helping me a lot because I still do not know Spanish, but I promise that I will learn it, quickly.

"It's a connection with the club and we are all a family. Support is important to have effective communication."