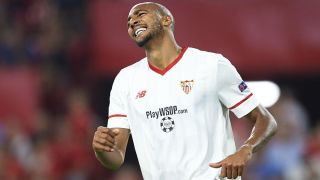 Steven N'Zonzi has shown a willingness to return to action with Sevilla after reportedly trying to secure a move away, but new coach Vincenzo Montella is unsure if that attitude change will last until the end of the season.

The France international midfielder was completely out of the first-team picture at the end of Eduardo Berizzo's time in charge, with the two understood to have fallen out at half-time of the Champions League draw with Liverpool on November 21.

According to reports, Berizzo singled N'Zonzi out for criticism as Sevilla found themselves 3-0 down at home and subsequently substituted him, with the former Blackburn Rovers and Stoke City man said to have left the stadium during the break.

Speculation has since linked N'Zonzi with moves to Everton, West Ham and Arsenal, but the sacking of Berizzo on December 22 has seen the rumours decrease and the Argentinian's successor – Montella – believes the midfielder is again looking like one of the team.

"I've talked to him and I've seen him willing to be a part of the team," Montella told reporters on Tuesday.

"But I do not know if it's going to be like that for the whole season – I can't get into his head.

"He is fine, he has trained well and is a great footballer. I don't like to give the line-up the day before a game, I like that to be known first by the players, but he is available for tomorrow [Wednesday's Copa del Rey clash with Cadiz] and for the derby [against Real Betis on Saturday]."