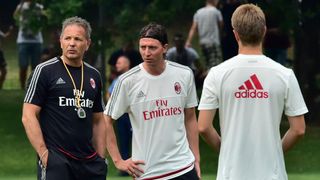 Riccardo Montolivo has backed Sinisa Mihajlovic to turn things around at AC Milan after their 1-0 defeat at home to Bologna on Wednesday.

Milan are seventh in Serie A after an inconsistent first half of the season, 11 points behind leaders Inter, prompting Mihajlovic to receive considerable criticism.

Nevertheless, Montolivo believes his coach is still the right man for the job as the Rossoneri prepare for a clash away to fifth-placed Roma on Saturday.

"Our aim was to win versus Bologna, but we failed to achieve that. Having said that, the team gave everything to win and put in a decent performance," the midfielder said at a news conference.

"If we were to play the match again, nine times out of 10 we would win. We went all out for the victory and were hit on the break and they won.

"I am not happy about the opinions formed in the aftermath on the team and the players. In football, results shape opinions. But I know the coach better than anyone and under pressure he gives his best," he added, having also worked with the Serbian at Fiorentina.

"We have to pick ourselves up right away and we're only focused on the coming match."

Montolivo also had his say on the incident after the loss to Bologna, when a number of players seemingly refused to thank the fans for their support, the crowd having made their displeasure at Milan's performance apparent.

The 60-cap Italy international attempted to downplay the significance of what is seemingly something of a strained relationship between squad and supporters.

"At the end of the match, we have the habit of thanking the fans. I felt it was important that everyone did this after the Bologna game," he said.

"I called on my team-mates. Alex headed straight to the changing room, but only because he had a knee injury, and he hasn't been called up to the squad for the Roma match because of this. Luiz Adriano and [Carlos] Bacca in the end followed me. I am disappointed that so much has been made out about this."