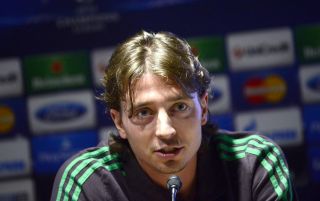 The Serie A side had the perfect start to the game as Robinho opened the scoring in the ninth minute, but Lionel Messi's equaliser midway through the first half earned the visitors a point.

Both sides had chances to win the game, with Robinho and Sulley Muntari guilty of missing fantastic opportunities for the hosts, while they were relieved to see Adriano Correia spurn Barcelona's best chance.

Montolivo insisted he was happy with the point, and felt that they were making progress compared to their last meeting.

"We had a better control of possession compared to last season's game," he said. "We had two or three chances to hit them hard, but unfortunately we didn't take advantage of them.

"It's a good result for us, but we are a little bit disappointed because we wanted to win the game.

"If we play as a team we can match anyone, the most important thing is always the team spirit.

"Kaka played a terrific game, even if he is not at full steam yet."