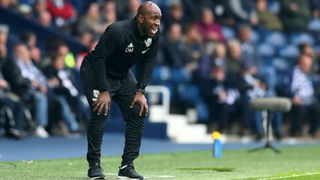 Moore has been handed the role following the sacking of Alan Pardew in the wake of eight consecutive league defeats.

And the former defender looked on course for a valuable victory when Jay Rodriguez put the Baggies in front nine minutes into the second half, following a tepid first.

But Tammy Abraham rose to head home the equaliser from a corner 15 minutes from time, leaving West Brom 10 points from safety.

"I'm always one for if you don't win the game, you don't lose the game, but I'm really pleased they showed character to stay in it, dig in and work well with each other," Moore is quoted as saying by BBC Sport.

"I've had three days to work with them and I thought the players were first class.

"They did what I asked them to do and we almost came away with a good three points. I'm really delighted even though we couldn't hang on for the win.

"We've come through this one with an overall team performance against a well-organised Swansea team that carries a threat. The way we played today was very good."

Discussing the leveller, Moore added: "It was a great delivery and Tammy got his head on it.

"You're always disappointed to concede from a set play but I'm happy we gave a good fight to stop the rot and get a point in the bag."

"I am pleased," said the Portuguese. "After the game, we didn't talk too much about it but we knew West Brom would still be a difficult game even though they changed the manager.

"We must do better in the first half when we have the ball, but after the goal we reacted and had a lot of mental strength. The team produced a fantastic reaction. We didn't give many opportunities to them in return to create chances.

"We aim to collect a good number of points and this is one more. We wanted more but, luckily for us, we had time to react and collect one point."