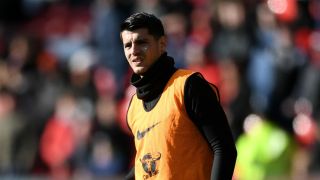 Alvaro Morata has a good chance of being selected for the World Cup despite failing to make Spain's latest squad, says coach Julen Lopetegui.

Morata - yet to score in 2018 - was among the headline absentees from the squad named by Lopetegui for international friendlies against Germany and Argentina on March 23 and 27 respectively.

Chelsea team-mate Cesc Fabregas was also left out - although Marcos Alonso earned a maiden call-up - while Bayern Munich's Javi Martinez was not included.

Villarreal midfielder Rodri and Valencia captain Dani Parejo are included for the first time, and Lopetegui has left the door open for the likes of Morata to return.

"Tomorrow is not the World Cup, there are players that are not included but have their chances intact as is the case with the players included," Lopetegui told reporters. "We are looking to get more information about players.

"[Morata] has had several problems, he has played little but his chances are intact. Morata, I am sure, will have a great end to the season and will have a good chance of going to the World Cup.

"We felt it was the right moment for [the new faces]. They are in good form but still there are others that deserve to be included and are not there.

"With Dani and Marcos we felt it was the right moment. Marcos is doing well and it would be good to see him train and compete with us. We like Rodri a lot, he is a very complete player. The reports that we have had about him are very positive."

Brazil-born striker Diego Costa is back in the Spain squad, having scored six times for Atletico Madrid since re-joining the club from Chelsea in January.

"Diego, when he was playing, was part of our game, then he stopped playing and stopped coming," Lopetegui said.

"Now he is active again and he comes back, but that does not give him the [World Cup] position."

Spain open their World Cup campaign with an Iberian derby against neighbours Portugal on June 15 before facing Iran and Morocco.