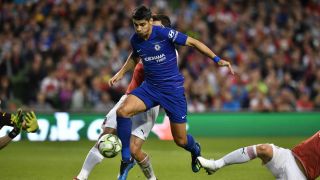 Alvaro Morata has passed up Chelsea's number nine shirt in a tribute to his newly born twins.

Morata became the Blues' record signing last year and took on the jersey all strikers cherish at Stamford Bridge.

He began the season in fine form but only scored one Premier League goal after the turn of the year and missed out on a place in Spain's World Cup squad.

Recent days away from the field have been momentous for the 25-year-old after his wife Alice gave birth to twins Alessandro and Leonardo last Sunday – July 29, sowing the seeds for his numerical tweak.

"It is a day I will never forget, to welcome my twin sons into the world," Morata told Chelsea's official website.

"My family is so important to me and I want to honour them and my wife, Alice, when I am on the pitch which is why I have decided to take a different number for the new season and remember this special day by adding the number two to my shirt.

"I am sorry to the fans who may have bought a number nine with my name already, but I hope you understand my tribute and that it will not be a problem and we can make you a new one with the 29.

"Thank you for your support and I hope this year there will be lots more to celebrate."

'I like the number nine, but now I have my two babies with me!' Watch 's full interview in the Chelsea app later today! August 3, 2018

In line with Morata's wishes, Chelsea are offering a free exchange for any fans who have already bought this season's strip with "Morata 9" on the back from an official club outlet.

Chelsea face Manchester City in the Community Shield at Wembley on Sunday before taking on Huddersfield Town in their Premier League opener next weekend.