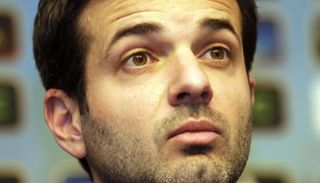 "I don't like to say that it's the end of an era but we are having another look at the recent events," Moratti told reporters outside his office in Milan.

"I haven't spoken to Stramaccioni or anyone else. This is the time for reflection and the reflection will be long."

Inter, the 2010 treble winners, suffered a wretched season, finishing ninth in Serie A after losing 16 of their 38 league games and failing to qualify for Europe for the first time since 1999.

Stramaccioni, who took over from Claudio Ranieri in March 2012, had previously been freed of blame by Moratti, as the coach was forced to cope with an ongoing injury crisis. But a 5-2 home defeat by Udinese in Inter's final game has made the 37-year-old's position precarious.

"On the one hand there is the talent of Stramaccioni, a guy who definitely will be successful in his job; on the other we have the current situation," Moratti said. "I'm thinking about what is the best choice."

Italian media are already linking Inter with Walter Mazzarri, who quit Napoli on Sunday after leading them to a second-place finish.

"Mazzarri? All coaches are good, but then they have to work at Inter, which is a different thing," Moratti said.