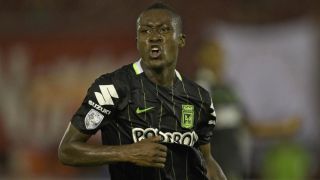 Marlos Moreno will join Manchester City before heading to Deportivo La Coruna on loan, according to his agent.

The Colombian forward won the Copa Libertadores with Atletico Nacional on Wednesday night, beating Independiente del Valle 2-1 on aggregate, but he is now set for a move to Europe.

City have been repeatedly linked with the 19-year-old in recent weeks, and Moreno's representative has now suggested that a switch is imminent.

"I will travel with him on Saturday to sign a contract with Manchester City and he will go on loan to Deportivo La Coruna for a year," Eladio Tamayo is quoted as saying by Futbolred.

Moreno has scored eight goals in 43 club appearances so far, and made his international debut in March.

Tamayo poured praise on the young star having seemingly sealed a big move.

"The main architect of all this is Marlos, with his discipline and commitment. I just contributed a bit," he added.

"I love him like a son. We built this dream together and we did it with the help of his mother, his brothers and his girlfriend."