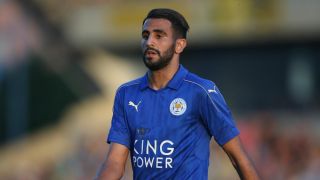 The PFA player of the year scored 17 goals and assisted another 11 as he helped Leicester to the most unlikely of Premier League triumphs in 2015-16, with the likes of Barcelona and Arsenal reportedly interested in his services.

However, following N'Golo Kante's switch to Chelsea, Morgan is keen to limit the losses as Leicester look to defend their Premier League crown.

"I know there’s a lot of talking going off but hopefully everybody can follow in my footsteps," said Morgan, who recently signed a new three-year deal with Leicester.

"We want to maintain our key players and build on that with the new players because we have got a lot to play for this season.

"We have some fantastic players and some of the bigger teams in Europe are going to want them.

"We need to focus on our job, let the people talk the talk and do what we can do on the pitch."

And while Morgan admitted it was disappointing to see some players leave the club, he said interest from other clubs was part and parcel of being such a good team.

"I suppose it's to be expected especially after the season we had and I suppose teams trying to poach our better players is part and parcel of the job," he said.