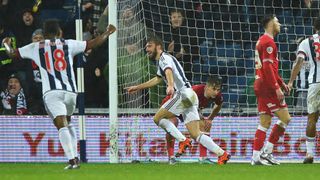 James Morrison spared West Brom's blushes with a late equaliser to force an FA Cup third round replay against Bristol City, but he believes a cup run is still on the cards for the club.

West Brom trailed Bristol 2-1 at home before Morrison struck in the fifth minute of stoppage time to keep his team in the hat for the fourth round draw.

Saido Berahino had put West Brom 1-0 up after 67 minutes, before Jonathan Kodjia and Kieran Agard scored one each to put the visitors ahead.

It made for a stuttering start to West Brom's campaign, but a drawn third round clash is familiar territory for manager Tony Pulis, who took Stoke City to an FA Cup final in 2011 after drawing their third round clash away to Cardiff.

Morrison is hoping for a similar achievement in 2016.

"The manager said after the game when he got to the final (with Stoke in 2011) he drew his first game at Cardiff," Morrison told the Birmingham Mail.

"There’s another chance to get into the next round which is the main thing at the end.

"I just had a feeling the ball was coming to me so I was ready.

"I think the lads would have given me a little dig in the changing room (if I’d missed).

"I thought we were doing alright, creating some chances in the wide areas, just lacked that bit of quality.

"They came fighting back, credit to them, they played alright Bristol, but as a team we kept on going."