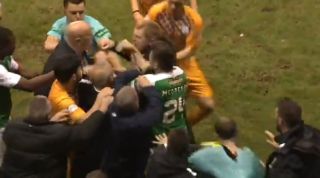 Hibs and Morton played out a 0-0 draw at Easter Road on Wednesday night – but the game wasn't without incident.

In the last minute of the match, Morton substitute Kudus Oyenuga was sent off after putting in a nasty tackle on Jordon Forster. Hibs then had their captain Darren McGregor sent off for an alleged headbutt on Oyenuga, who seemed to go down untouched.

With red cards being issued, a brawl kicked off on the touchline which involved Morton manager Duffy and Hibs' Lennon going at each other. The rest of the players and coaching staff from both teams duly joined in. The end result? Duffy and Lennon were both sent to the stands.

But tempers hadn't simmered down afterwards, with Lennon claiming Duffy offered to fight him.

"The next thing, I've got the Morton manager asking for a square go," he told media after the match.

"Fair enough, I won't back down with their assistant manager [Craig MacPherson] and their players coming at me."

Duffy didn't comment after the match, but released a statement on Thursday morning.

"I am not going to get involved in a public debate with the Hibs manager, but what I would state is that I categorically, 100 per cent did not ask for a 'square go' or use anything even remotely like that term," he said.

Classy stuff all round, good job everyone.