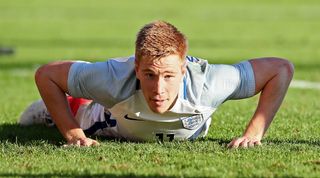 Watmore, 23, was on holiday in the Caribbean with his partner having been given time off by manager David Moyes as he continues to recover from a cruciate ligament knee injury.

But during a speedboat ride with his partner, the watercraft was struck by a catamaran. Watmore and his girlfriend were knocked off – as were the three older passengers on board with them.

Chinese player has nightmare against Iran, then rumbled for affair by wife on social media

With the elderly group clearly in danger, Watmore helped keep the fellow tourists afloat before coastguards came to the rescue. The Sunderland striker then went a step further and assisted one of the wounded passengers by providing strapping around their wounded knee with his t-shirt.

"It was scary, life or death. I’m lucky not to be coming back in a box," one of the rescued group told The Sun.

"We assumed [the catamaran] would see us and change course, but it then got closer.

“Duncan helped everybody to get on to the boat — he couldn’t have been nicer.”

Unfortunately for Watmore, Sunderland look like one sinking ship that can't be saved.